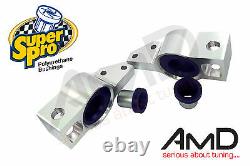 This improved design bush will out last OEM bushes significantly however, these bushes have been designed with an offset mounting. This allows for a greater caster angle to be achieved cutting down on wheel hop and spin. (THIS KIT REPLACES THE FRONT WISHBONE REAR BUSHES). By using SuperPro's polyurethane version you not only get the benefit of a longer lasting material, but you also get the benefit of a completely new design.

SuperPro's new design bush comes with two separate bushes that fit inside each other, this acts as a bearing allowing the wishbone free movement with the suspension travel which is the original cause of the standard bushes constant failure. Suitable for the following vehicles.

Northern Ireland, Southern Ireland, Highlands, Orkney, Shetland, Guernsey, Jersey, Isle of Wight, Isle of Man. We are dedicated to ensuring the highest possible quality service to our customers. We do not offer return on change of mind.